Lilly is grateful for the protection and freedom that she gained from treatment for her sesame allergy. She is hopeful that a new level of awareness of sesame allergies, and her own story, shared here by her mother, will make life safer for so many others.

Fifteen years ago, I sat my 17-month-old into her high chair and offered her one of my favorite foods for the first time. She dug into the hummus with enthusiasm for about five minutes, until I realized with dread that she had hives covering her face and neck. For months, we knew that Lilly was prone to bad eczema and she’d had difficulty already with dairy. When she nibbled on her first bagel, she had small mysterious hives. But it wasn’t until that moment with the hummus — made heavily with tahini which is ground sesame paste —  that we suspected a sesame allergy.

In those first weeks of confusion and fear after her reaction, our pediatrician literally threw her arms up in the air and said “I guess you can be allergic to anything, but we can’t test for sesame. You can take her to an allergist when she’s three years old.” Thankfully an allergist quickly refuted that “advice,” and promptly did blood and skin tests confirming not just a sesame allergy, but also dairy, oat, almond, and soy. Over the years, Lilly’s allergies have changed in so many unexpected ways — and thankfully so has the awareness of sesame as a major allergen.

These past few weeks, with big changes to labeling laws and the surprising news that popular restaurants like Wendy’s, Chick-Fil-A and Olive Garden are adding sesame to products that were previously considered safe, sesame is finally making headlines. I know this feels acute and scary for so many families as safe foods and restaurants are now crossed off the list. But this level of awareness of sesame allergies is actually a huge leap. And there is hope — Lilly’s full story is an excellent example of that.

Hope for Our Family

For many years, anxiously managing Lilly’s sesame allergy with strict avoidance, we lived in an isolated silo. Extended family didn’t understand why Lilly’s bread had to be homemade or why I had distrust of ingredients that vaguely said “spices” or “natural flavors”. My husband and I ate most takeout food as if it was illicit –  always after she was safely tucked into bed and never saving those leftovers in the fridge. Because there was no educational material in the U.S. on where sesame might be hidden, each year I dug through literature from Canada to recreate my own information sheet to educate teachers and other parents. Those were tough, exhausting years keeping Lilly safe. 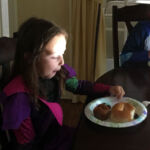 Hope arrived when Lilly was 8 years old  — ironically after a failed in-office food challenge. Our allergist was just starting to offer oral immunotherapy (OIT) to select patients and he thought she would be a good candidate. After she reacted to a small amount of tahini at her food challenge, we realized that strict avoidance would continue to take a toll on our whole family’s well-being. Desensitization with OIT offered us an “insurance policy,” the idea that if Lilly unknowingly ate a small amount of sesame, she wouldn’t react.

For years, Lilly dosed religiously, mostly preferring tahini with equal part sugar in a spoon. We occasionally mixed it up with tahini cookies for dosing at sleepaway camp. But she had her system and stuck with it. OIT was a leap of faith for all of us, but especially for a child who has been told her whole life that a food that others enjoy could be poison to her. When she was very little, we had a mantra “Yes, Sesame Street. No to sesame foods.” Less than a year into treatment life had opened up. Lilly’s new favorite takeout meals were sushi and bagels. 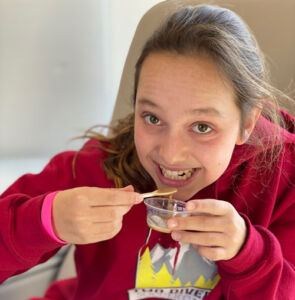 At 13 years old, with five years of OIT solidly behind her, we grew more relaxed about her maintenance doses. But the real test of her treatment came later that year. At a party, Lilly told me she’d just enjoyed a big chunk of “delicious peanut butter fudge.” She actually had eaten a large portion of sesame halva — possibly four times the amount of sesame protein she would take in an OIT dose —  without even a mild reaction.

With long term maintenance of OIT, it’s important to have checkpoints for testing to better understand how the allergy may have changed. That accidental halva ingestion was the impetus for us to do updated testing — her blood IgE had dropped significantly and her skin test was negative. Ultimately, an in-office food challenge at Latitude would provide clarity on what she was safe to eat. She passed that challenge — giving her the confidence to freely eat sesame products and ingredients. 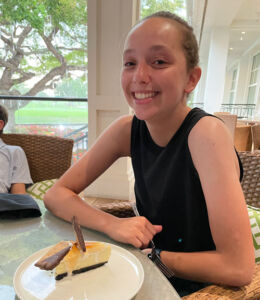 I am comforted that my own daughter — nearly 17 years old now and planning for college — is safer in the world thanks to OIT.  But, families like mine who commit to long-term treatment never forget the “why” — why we started OIT in the first place. And because of that, as sesame is in the headlines, I encourage all food allergy families to be familiar with the symptoms of a sesame allergy, the ways sesame can be listed as an ingredient and, most importantly, consider updated testing and proactive treatment at Latitude.

Latitude was founded by people with personal experience with food allergies. Debbie Chizever Taback, a Latitude co-founder, recognizes that this may be a confusing time for many families managing sesame allergies. But she shares her daughter Lilly’s story as one of hope and she is grateful for this new level of awareness for sesame as a top allergen.

Eat more freely and live life with latitude in 2023

Celebrating the Holidays as a Food Allergy Family

How to Have a Fear-Free Halloween with Food Allergies