Shellfish allergy is typically caused by tropomyosin, a key protein found in the mollusk and crustacean families. Additional allergens in mollusks include amylase, arginine kinase, myosin heavy chain, and haemocyanin. Tropomyosin is also a shared protein in invertebrate shells.

As a result, insects (such as cockroaches) and arachnids (such as dust mites) can trigger a similar allergic reaction. This similarity creates a high correlation between dust mite allergies and shrimp allergies. Even vegetarians could develop a shrimp allergy through inadvertently breathing in dust mites! Learn more about shellfish allergy symptoms, diagnosis, and treatment in the sections below.

Symptoms of a Shellfish Allergy Reaction

Severe shellfish allergies can result in anaphylaxis, a severe, life-threatening allergic reaction. In anaphylaxis, the immune system overreacts to proteins in shellfish and mollusks. This causes a rush of chemicals to fight off the invading proteins. Signs of anaphylaxis include:

Anaphylaxis is a medical emergency and must be treated with epinephrine immediately. With severe shellfish allergies, anaphylaxis can occur within minutes. Those with a shellfish allergy are advised to carry two epinephrine auto-injectors to ensure rapid treatment in case of accidental ingestion or contact. 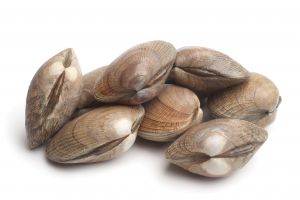 Shellfish allergy can be particularly challenging to diagnose. Although the signs of an allergic reaction tend to be more severe than other food allergies, the resulting symptoms can mirror those of other conditions.

Oral allergy syndrome (OAS) can also mimic shellfish allergy. This type of food allergy is generally considered to be mild, and occurs when the mouth and throat come into contact with raw vegetables or fruits. OAS shares symptoms with shellfish allergy, such as itchiness of the mouth and throat and swelling in the mouth (in rare cases swelling of the throat), which can make it difficult to separate the two.

The gold standard of testing encompasses three ways to clinically determine whether someone has a true shellfish allergy or is suffering from shellfish toxicity or poisoning.

A safe and low-risk test in which the skin is lightly pricked with a suspected allergen. Because there is a risk of cross-reactivity with dust mites, results from a skin prick test when evaluating for shellfish allergies must be carefully analyzed and protected from cross-contamination.

Measures the amounts of IgE antibodies that the immune system has deployed as an allergic response to shellfish.

This is a gradual, step-by-step process in which the patient consumes small amounts of a suspected allergen over 3 to 4 hours. Because severe allergic reactions to shellfish can become life-threatening, this is strictly performed under the supervision of a trained clinician. Additionally, the clinician must have determined that the patient is likely able to safely – and successfully – pass the food challenge.

Ingredients to Avoid for Shellfish Allergy

Common examples of crustaceans include:

While some foods clearly have shellfish in them, others may be more subtle. Some common foods that may contain shellfish include:

Those with a shellfish allergy must be vigilant about avoiding cross-contamination, particularly when dining out. Dishes, silverware, cooking pans, and oils that have come into contact with shellfish may induce an allergic reaction. As a result, certain types of foods that tend to rely heavily on shellfish may need to be avoided entirely. Chinese, Thai, Japanese, Vietnamese, Malaysian, Cajun or Creole restaurants are all examples of cuisine that use shellfish heavily.

Shellfish can also be found in unlikely places such as pet food, vitamins and nutritional supplements, and even certain types of fertilizers.

At Latitude Food Allergy Care, we provide oral immunotherapy (OIT) to help patients improve their quality of life. OIT is approximately 85 percent effective for single or multiple food allergies and is safe for all ages.

Long-term treatment of shellfish allergy (as opposed to avoidance) is an ongoing field of study, but positive results can be seen from OIT. To be a successful candidate for oral immunotherapy treatment, patients must consume small amounts of shellfish on a daily basis.

The goal of oral immunotherapy is to continually expose the patient to increasing amounts of an allergen. As OIT progresses, the body is gradually desensitized and learns to adapt. This allows for fewer dietary restrictions, and protects against severe or life-threatening reactions due to accidental exposure. If clinically relevant, patients can choose to combine their oral immunotherapy with Xolair, an anti-IgE monoclonal antibody that helps inhibit allergic reactions.

To determine whether a patient may be a candidate for OIT, our expert clinical team will evaluate existing health conditions, collect a full medical history, and discuss lifestyle.

Are you or a loved one suffering from a suspected shellfish allergy? Take the next step toward better health, safety, and quality of life with Latitude Food Allergy Care. Our expert clinicians are available to discuss your testing and treatment options. Contact us today to schedule a no-obligation conversation with one of our Patient Care Coordinators.